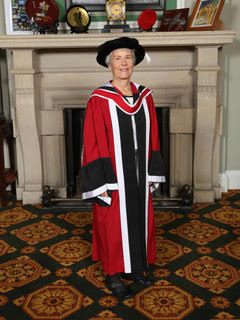 We are delighted to announce that CNM’s Project Director Julia Usher has been awarded an Honorary PhD by the University of Essex, in recognition of her services to music in the county and beyond.

Below is the full text of the oration given at the ceremony by Phil Toms (Head of Schools: Digital Media, Music & Performing Arts, University Centre Colchester).

“It is a great honour for me to introduce Julia Usher, a Colchester-based composer

and musician, who is being awarded an honorary doctorate today. Julia has been nominated for her extensive contribution to music, both locally and nationally.

During her time as a student, Julia studied at the University of York and at Cambridge with Richard Orton and Robert Sherlaw Johnson, and later qualified as a practicing Music Therapist at the prestigious Nordoff–Robbins Centre in London. In 1980, Julia set up her own music publishing company ‘Primavera Music UK’ with her colleague Enid Luff, for which they have just celebrated 34 years of publishing.

As a founding member of the ‘Women in Music’ organisation, set up in 1987, Julia displayed her passion for furthering equality and opportunities for women at a time when equality issues were significantly more prominent and women were underrepresented as composers and in music generally.

Julia settled in Colchester in 1999 and it is fair to say that she has had a most significant influence on the musical life of the town.

She has been a Composer in Residence on three occasions, first in 2002 for the Colchester Youth Chamber Orchestra, in 2004 for the George Watts Museum in Compton for its centenary celebrations and in 2012 where she collaborated with a number of departments at the University of Central Lancashire.

Julia has collaborated with scientists and visual artists on many occasions and several of her compositions have included electronic elements, often incorporating natural and other environmental sounds.

In 2015, Julia was commissioned to compose a piece of music to mark the restoration of the Moot Hall Organ, behind me. “The Art and Industry of Pipework” combined the renewed organ with electronic sounds recorded in the Man Diesel UK Factory in Colchester. She has also written a number of Musical Theatre pieces and in 2003, Metier Records released a CD of five of her compositions.

Julia has been tireless in her support of many community and arts projects in Colchester and further afield in East Anglia. During the past 17 years, she has encouraged composers and performers to experiment with adventurous approaches to music, often working through improvisation.

She has worked closely with the College to run composition and improvisation projects with Colchester Institute students and has taken part in a number of local community arts projects including promoting concerts of new music in both Colchester and elsewhere. For many years, Julia has been actively involved in the ‘Colchester New Music’ organisation.

But it doesn’t stop there, as Musical Director of ‘CoMA EAST’ and ‘Firewire’, a local experimental and improvisation ensemble, Julia takes her time to meet fortnightly and lead the group with exciting modern music. Julia brings huge vision, energy and enthusiasm to all her endeavours. The selfless devotion of her time and her encouragement of others throughout the world of music, over a period of many years, make her a very worthy recipient of this award.” 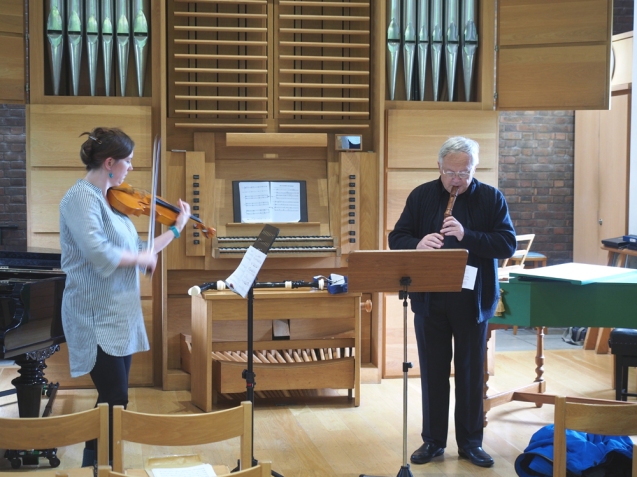 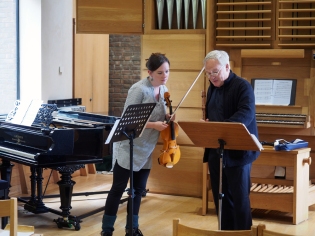 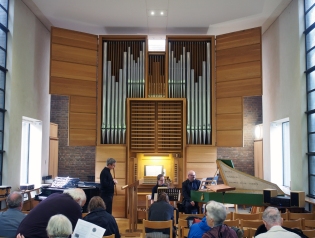 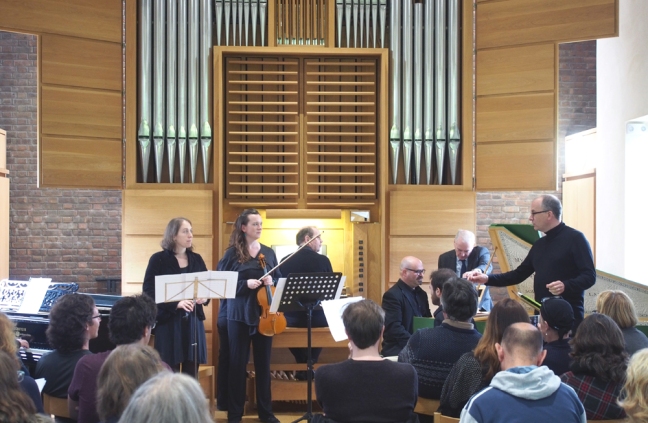 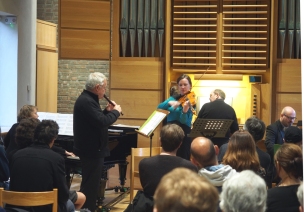 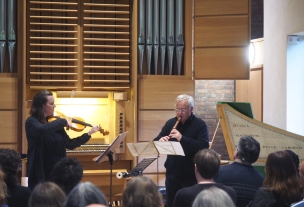 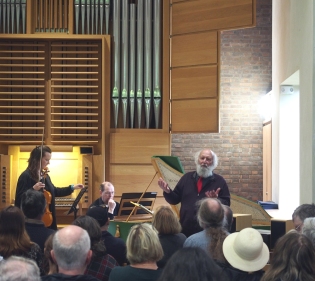 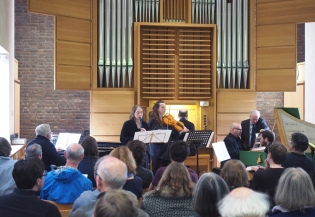 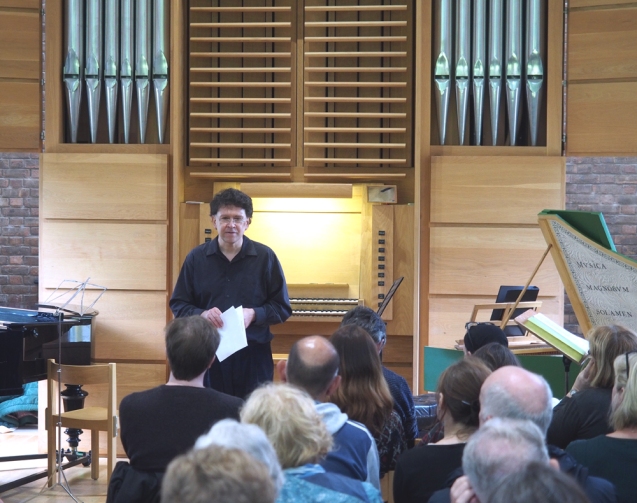 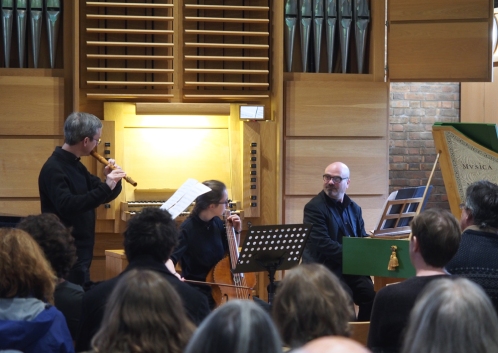 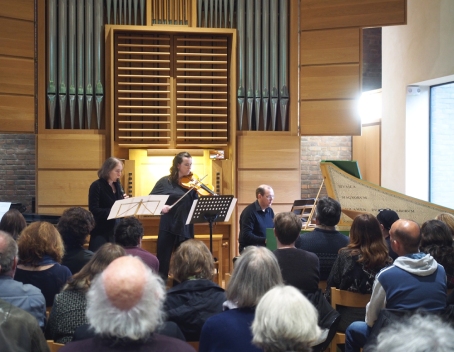 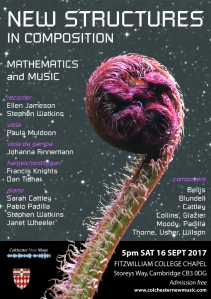 With the decline in popularity of traditional compositional structures such as sonata form, it is interesting to explore fields beyond music for new structural paradigms. This academic year, CNM member Francis Knights has a visiting mathematician, Pablo Padilla (UNAM, Mexico), working on a joint project applying mathematical tools to musicological problems (http://formal-methods-in-musicology.webnode.com/). This has inspired a number of ideas for how various algorithms and numerical patterns taken from the natural world could be used in composition. 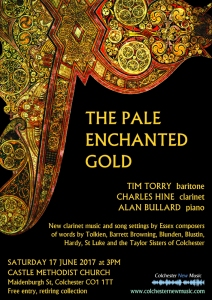 The programme is based around three key works: Tim Torry’s setting of JRR Tolkein’s ‘The Pale Enchanted Gold’ poem from The Hobbit, Alan Bullard’s setting of Edward Blunden’s ‘A Swan, a Man’, and also Alan’s ‘Three Blues’ for clarinet and piano.

Alongside these, CNM members have contributed new pieces for clarinet and piano, plus song settings of poetry with all kinds of interesting connections to the pieces above. The full lists of members’ works in each category are as follows: 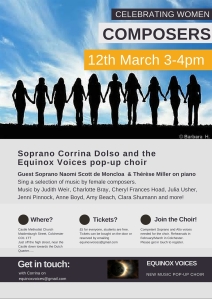 On 12th March 2016, works by CNM members Julia Usher and Jenni Pinnock will feature in a concert celebrating women composers, also including pieces by Judith Weir, Charlotte Bray, Cheryl Frances Hoad, Anna Boyd, Amy Beach, Clara Shumann and others. Soprano Corrina Dolso will be performing along with her new Equinox Voices pop-up choir, joined by Guest Soprano Naomi Scott de Moncloa and pianist Thérèse Miller, at Castle Methodist Church, Maidenburgh Street, Colchester CO1 1TT. The concert runs from 3-4pm; tickets (£5 or free for students) will be available on the door, or can be reserved by e-mailing equinoxvoices@gmail.com. Download the pdf concert poster here.

The choir is seeking competent sopranos and altos to take part in the concert; rehearsals will take place in February/March in Colchester. Please contact equinoxvoices@gmail.com to register.