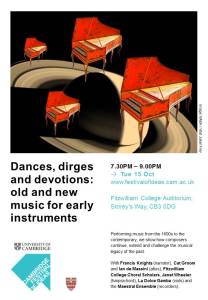 Four works by CNM composers were included in a performance of old and new music for early instruments at Fitzwilliam College Auditorium on 15 Oct 2019 as part of Cambridge University’s Festival of Ideas. Works for recorder quartet with harpsichord by Jenni Pinnock, Peter Thorne and Stephen Watkins were performed by the Maestral Ensemble with Janet Wheeler on harpsichord, alongside pieces by Alison Willis and Janet Wheeler herself; these works were originally written for CNM’s call for scores.

The concert, narrated by Francis Knights, also included works for voices and viols by composers from Tallis and Byrd to Ivan Moody, Roy Marks and a premiere of a new work by Carl Rütti, performed by Ian de Massini and Catherine Groom (altos), Fitzwilliam College Choral Scholars, and La Dolce Gamba viol consort.

We have created a compilation of information on eleven works selected by Francis Knights and Dan Tidhar from our two harpsichords call for scores, including a sample page from each score, notes on the works and composer contacts. The document can be downloaded here:

Details are included for the following works:

A big thankyou to everyone who contributed to the 28 April 2018 two harpsichords concert: the performers, the composers, our hosts Daniela Bechly and the Pimlott Foundation, Liz Leatherdale for all her help with publicity, and last but not least all the audience members who made it out to Great Horkesley on a rainy day! 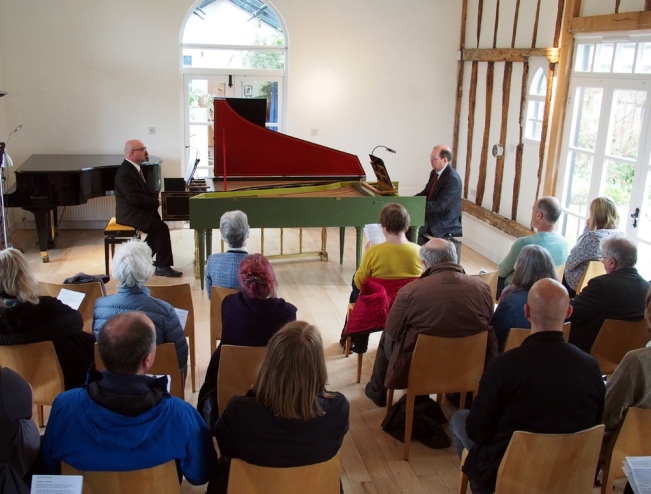 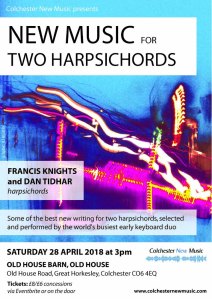 Tickets are now on sale here for CNM’s upcoming concert of new works for two harpsichords, performed by the Knights-Tidhar duo (pictured). The concert is at 3pm on Saturday 28 April 2018, at the Old House Barn, Old House Road, Great Horkesley, Colchester CO6 4EQ, UK; ticket price £8/£6 concessions. More information on the concert can be found here. 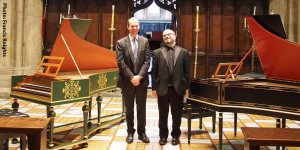 We are delighted to announce the results of CNM’s call for scores for two harpsichords, which attracted 27 entries in a fabulous range of styles from composers around the world. Having worked through all of these, Francis Knights and Dan Tidhar have chosen to perform the works listed below at an April afternoon concert in the beautiful setting of the Pimlott Foundation‘s Old Barn in Great Horkesley.

These pieces have been selected as they are well-suited to the specific sound and playing technique of the harpsichord (rather than the modern piano), are technically feasible on the available instruments, and are of suitable duration and level of complexity to be well realisable within the available rehearsal time:

Mark Bellis studied at Cardiff, Durham and Cambridge Universities with Dr David Wynne, David Lumsdaine & John Casken. In 1985 he was awarded a PhD in Composition from Durham University. He has had performances at the Purcell Room, London, and on Radio 3. He composed a large-scale orchestral work for the BBC National Orchestra of Wales, and more recently, much choral music. Since 2005, Mark has been Course Leader for the BA Music programme at Colchester Institute, Essex.

Ivan Božicevic (* 1961) is a composer, organist, pianist, arranger and jazz musician in Split, Croatia. His output encompasses orchestral, chamber, choral and soloistic works, as well as electronic compositions. He is interested in a variety of genres (early and baroque, electronic, jazz, world music) and the possibility of “cross-fertilizations“ between those genres, always aiming for the stylistic amalgamation on a deeper level. http://www.ivanbozicevic.com

Theresa Chapman is a Colchester-based Piano Teacher, and also works as a Music Tutor for Essex Music Services. She holds both a B.Mus degree from the University of Cape Town and an Honours degree in Music from Stellenbosch University.

D. Edward Davis writes music that engages with the sounds of the environment, exploring processes, patterns, and systems inspired by nature. He is currently based in Connecticut, USA, where he is a Practitioner-in-Residence at the University of New Haven. sound.warmsilence.org

Randall Snyder was born in Chicago in 1944 and attended University of Wisconsin earning a DMA degree in 1973. He has taught at colleges in Illinois, Wisconsin and for several years at the University of Nebraska. He currently is a free lance musician living in Lincoln, NE. and adjunct professor at Peru State College.

José Jesus de Azevedo Souza studied in England at the Purcell School with a scholarship from the Calouste Gulbenkian Foundation. He then studied at the Trinity College of Music and the University of Sheffield. His music has since been extensively performed in Europe, Asia and the United States as well as recorded on Sarton Records and Dux.

Peter Thorne has been composing music since the age of about 12. He read music at Oxford and the UEA, where he took a master’s degree. Over the years he has written in many different styles and genres but most recently he has been writing for wind instruments and piano. Peter’s music often features influences from various kinds of jazz and pop and is often colourful and rhythmic.
http://www.peterthornemusic.co.uk/composing

Stephen Watkins studied trombone, piano and recorder as well as composing at the Guildhall School of Music. Currently he is involved in writing large scale pieces for recorder orchestra. His own composition style very much reflects the wide range of music styles. He is published by houses in Germany, Austria, The Netherlands, USA and at last UK!

Ian Wilson is a music graduate of Durham University, where he received composition lessons from Robert Casken, and is currently a secondary head teacher. An album, called ‘Come and Rejoice in Jesus’, containing songs written for his church, is available on iTunes. The Dunblane Chamber Orchestra performed his ‘Three Songs from A Shropshire Lad’ in May 2012. ‘The Sleep’, a setting of an Elizabeth Barrett-Browning poem, was performed by members of CNM in June.

Rasmus Zwicki is Danish born composer currently residing in London, where he studies with Laurence Crane at the Guildhall School of Music and Drama. His music is stylistically multilingual, often mixing the specific elements of various musical genres and traditions that best communicate the core ideas of a particular work. http://rasmuszwicki.com