An article on CNM’s two harpsichords call for scores has appeared in Issue 13 of Sounding Board, the newsletter of the British Harpsichord Society. It is downloadable free from the BHS website here.

Based upon our experience with the call, the article also discusses a number of typical problems with submissions, and provides a range of practical advice on composing for two harpsichords.

On Saturday 11th May, several CNM members will have their music premiered by harpischordist Sara Stowe at her Music of Starrs and Skies concert. Premieres of music by Philip Joy, Peter Thorne, Laurence Glazier and Jenni Pinnock will be performed alongside a varied programme of music including other newly commissioned works. 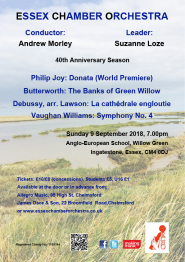 r Philip Joy is to be given its premiere performance by the Essex Chamber Orchestra (ECHO) in their 40th Anniversary Season.

The concert is to be held on Sunday 9 September, at 7 pm at Anglo-European School, Willow Green, Ingatestone, Essex, CM4 0DJ 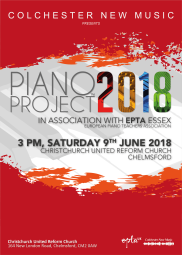 Teachers and students will be performing new music for aspirant pianists selected from Colchester New Music’s call for scores at the end of 2017. For details of the shortlisted works, please click here.

This article is the second of two from Dylan Christopher, Colchester based pianist and composer who is running the Piano Project 2018 project in association with Colchester New Music.

When music is written for virtuoso performers, there are generally no limits.  Anything can be written and performed, so long as there is a message to be shared, an idiomatic practical application, and a legible score from which to read.  However, it is not until we are limited that we are truly tested as composers.

Limitations inspire adaptation, growth and discovery.  If a composer is limited to three note chords rather than six notes, they will make sure to use all three notes to get the best possible sound with what they have available.  If a composer is limited to a score with very little ‘clutter’ they will make every word, dynamic, articulation or general marking count to best illustrate meaning and intention.

These limitations foster efficiencies in engraving and orchestration, making the composer ask questions of themselves.  The key question here, always, is how can we write the same thing in the simplest of terms to achieve the same, if not similar result?  As composers, we are architects, planning each component of a composition for performers to interpret and then relay to our listening audience.

We must also consider that a large portion of musicians who will actively perform music on any given instrument are not professional, but amateur or hobbyist.  Unless existing in extremely fortunate circles, many composers will need to find performers to play their work; for the most part, it is likely to be music societies in one of the many churches or universities in the area.  If written for solo performance, many pieces are primarily performed in people’s homes, and not on the concert stage.

A composer looking for their music to be performed would be hard-pressed to find a seasoned virtuoso musician in this group, but what are found, are people who are genuinely interested in performing music as best they can, having a good time while doing it; that is providing the music and musicians are the focus of effort when writing it.

One of the many hurdles we encounter when writing for amateur performers (or for that matter, any performer) is simplicity.  Simplicity can mean many things, ranging from the level of detail we give via instruction all the way to how we convey pulse and metre throughout a piece of music.  The main consideration here is always: am I being clear enough?  If a performer has any questions about what they need to do with the music we provide, then we have not been clear enough.

Clear does not mean more instruction. Sometimes this can be illustrated by a well-placed slur, or an expression such as ‘Sempre legato’, ‘Forza’, or ‘Agitato’.  To put this into perspective, I have five editions of Beethoven’s Complete Piano Sonatas.  Despite this quintessential work being a transcendent staple in the canon of solo piano repertory, there are discrepancies between all versions.  The same piece of music is written five different ways, which vastly affects what the interpretation of that edition will mean.

Incidentally, I prefer the Henle Urtext, which has very little in terms of anything – articulation or cautionary dynamics – but is what Beethoven would have sent to his publisher after a once-over from a copyist.  It is worth considering that all of these editions have been thoroughly edited over the past two hundred years. The score seen today in the twenty-first century is the final result of refinement and reprinting; even then, there are still blemishes and some questions.

A problem that is faced when receiving contemporary music for performance is that it has often not been thoroughly edited to be considered and concise.  Many pieces suffer from what I consider ‘over-composition’, mainly due to music notation software being the performer during the composition process in place of a living, intelligent performer.  The result is often statements that do not need to be stated, inserted to facilitate an accurate ‘midi’ performance.

For a human performer, stating ‘Cantabile’, will mean to make the melody loud and smooth, while keeping the accompaniment quiet.  For music notation software, one would need to put separate dynamic markings for the melody and accompaniment, alongside excessive slurring.  If the programming of midi velocities is understood, this might not be the case.

If we can agree on the understanding that every piece of music written for performance by a living musician is read from the score in a first sitting, it changes how we write our ideas down.  From the performer’s perspective, rehearsal is not the first priority; that is secondary once we have understood what we need to do.  More often than not, a performer will give the score a once-over with the intent to understand what is expected of them; they then rehearse to make the ideas permanent and confident in performance.

From a composer’s perspective, thinking that a performer will simply practise it to ‘get it’ makes us lazy.  Even the best of performers, virtuosos, will be left confused by a score that has not been sufficiently refined to facilitate understanding.  A composer’s true mastery is being able to express musical ideas concisely, with consideration of their simplest form to facilitate understanding.  This understanding sets the trajectory for what is performed and later heard by our audience.