Probabilistic ideas are not new in music. At some point it became fashionable to compose musical dice games, the one supposedly by Mozart being probably the best known. In the twentieth century, composers like John Cage and Iannis Xenakis systematically used random elements in their compositions.

[i] By throwing a die once and two dice 11 times, twelve numbers representing pitches in the 12-tone scale can be obtained and assigned in order in a serial manner (or one can keep throwing, if all twelve chromatic pitches are required without repetition). Similarly, one or two dice could be used to make decisions relating to bar-length structures or other components.

[ii] A variant of a dice game could be used to write a collective piece, say a blues, among five people (though the entire procedure could also be carried out by one composer). Suppose, for example, that a standard twelve bar harmonic progression for the blues is chosen in G: 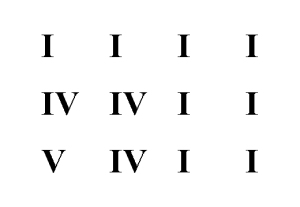 Each composer writes their own twelve bar blues and then all the scores are cut measure by measure, collecting together the first measures of each of the five composers, then all the second measures, and so on. The resulting twelve piles, each one with five possibilities for every measure, are shuffled. Finally a single measure is chosen from each pile, and assembled in order into a complete twelve bar blues progression.

Back to index of algorithms